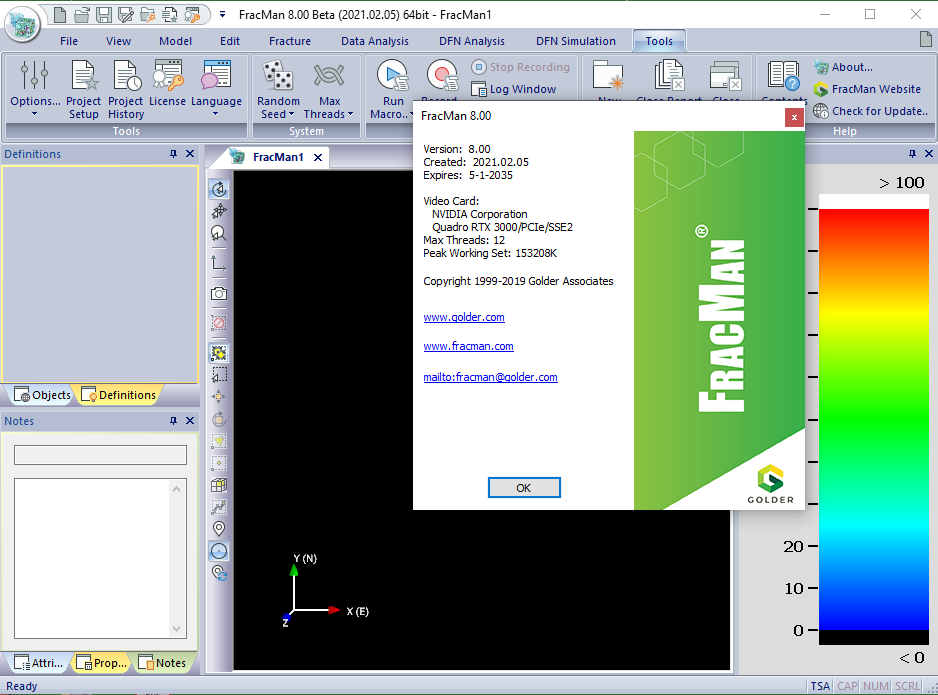 Launched in 1987, FracMan® is the world’s first commercially available Discrete Fracture Network (DFN) software and has since been adopted by organizations across the infrastructure, mining, energy, power, and nuclear waste sectors.  FracMan® Version 8 brings improvements such as new DFN simulation features and enhanced model visualization.

There are many new improvements

Coming to market in FracMan® 8, to help you deliver industry projects with detailed fracture network models. Many of these features are detailed in the below summary:

We’ve continued to evolve our DFN flow simulation capabilities with improvements in all elements of the workflow. Making full use of high fidelity static DFN models for flow simulation inside FracMan®:

That more physics and greater detail models can be captured in the simulation of fluid flow in the subsurface. Bigger models and better physics including transport, partially saturated flow, matrix coupling and thermal coupling.

• Further improvements to the

Further improvements in the FracMan® Geotechnical engine room have been included in FracMan® 8. Improvements for bench/slope/tunnel stability analyses include:

improvements to properly differentiate between different parts of the slope.

Impressive improvements to the DFN flow based upscaling approach come with FracMan® 8. A radical overhaul of the upscaling engine now permits high resolution DFN models on the field/site scale to be upscaled to equivalent grid properties (permeability/storage) much more efficiently. Making full use of available multi-threading and parallel simulation, flow based upscaling is now able to be used on the large scale DFN static/ dynamic models.

Building on the robust underpinnings of the FracMan® 7 workflows, the FracMan® 8 user interface is totally new. With a new ribbon layout it provides a modern way to help DFN modelling, find, understand, and use FracMan® commands efficiently and directly with a minimum number of clicks, with less need to resort to trial-and- error, and without having to refer to Help. Using a ribbon structure in FracMan® increases discoverability of features and functions, enables quicker learning of the program as a whole, and makes users feel more in control of their experience.

View: for rapid and flexible control of the display window contents.

Edit: for easy manipulation of object geometries including geometry clean-up.

generation approaches. Access all of the FracMan® 8 DFN fracture models for simple parameterizing.

the fracture network. Deal easily with post-generation operations such as fracture terminations and conditioning.

Tools: modify and adapt system settings and workflows around: language and accessibility, macro scripting language, and access the help files.