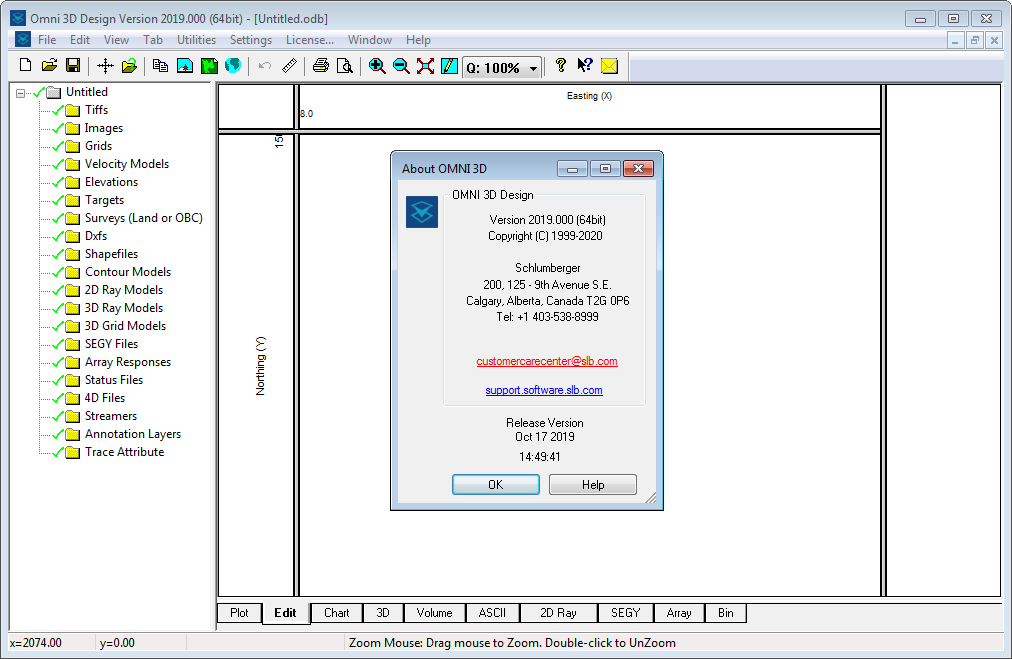 Below are brief descriptions of notable new features, enhancements, and fixes in Version 2019. To see the full list of changes click Help -> Read Update History... in the application.

Numerous planar units have been added. Planar units of a project are no longer required to be meters, feet, or international feet.

The Geographic (Latitude/Longitude) projection can now be selected as a project’s projection system.

Projection system shifts and rotations to WGS84 are now set and displayed for existing ellipsoid.

A 7-parameter datum transformation has been added.

Schematic previews for all shooting method

The preview provides a clear visualization of the patch that will be shot. The preview is updated immediately as parameters are modified.

This feature reduces the amount of trial-and-error time that was previously involved in configuring and shooting scripts.

Cloning provides a fast way to replicate an existing script or analysis in another survey. Previously one would have to create a new script  or analysis from scratch under each survey where it was needed.

Cloning is a new operation that (a) creates a new object at the desired destination, (b) copies parameters required to compute the object from an original object, and then (c) computes the new object.

This feature eliminates the tedious and frustrating task of object recreation when using many surveys. In addition, one can now make copies of an existing analysis within the same survey.

Automatic snapping during the digitization of polygons and polylines, and during the use of the Measuring Tool have been added.

Points of polygons and polylines are snapped to the nearest object of similar type when within a distance tolerance, which is specified in Settings -> Options -> Project tab. This functionality is widely used throughout the application in 50+ wizards including station selection, obstacle creation, points redefinition,

The Measuring Tool now snaps to the nearest station of multiple surveys when within the distance tolerance and invoked from the application toolbar.

New installers have been created to streamline the installation process. There are now only three OMNI 3D installers (Product Bundle, Movies, Tutorials).

The bundle installer automatically installs OMNI 3D and its required stand-alone program dependencies (of CodeMeter and Schlumberger Licensing). The movies have been reencoded using the common MP4 standard that can be played out-of-the-box on Windows systems with default media players. The EWE server installer has been eliminated with its payload now installed as part of the OMNI installation.

Going forward patches are now delivered as official MSP files (Windows installer patch), which are executed simply by double clicking the file. MSPs can also be uninstalled if need be.

The obstacle and detour inflation operation (1) can now be applied in bulk to all objects, and (2) is now only applied to objects that are visible so as to allow targeting of specific objects.

Increased the allowable precision (number of decimal places to write in eastings, northings, and attributes) for SPS writes.

Increased the allowable range for station and line symbol sizes.

· Station attributes are now cleared (set to Unset) prior to attribute writes. This enables smooth UI and more intuitive results especially when scripts do not include all stations.

Fixed an issue (latent hang) with the script copy operation that occurred only when copying the analyses.

Fixed crashes in 3D Design Wizard that would occur when parameters settings resulted in no script being generated.

Fixed P190 importer where missing S records could cause a crash.

Fixed crash/display invalid data for shot events which could occur when shots or receivers were modified and an existing script was not reshot or removed.

Fixed shoot-by-numbers script shooting issue where the number of shot events were incorrectly doubled in the roll in/out sections of the script. The issue was general in nature but showed up most for parallel surveys.

Fixed issue with the SEG/P1 exporter while depopulating output stations of a Survey (Land or OBC). The Bend Tolerance parameter (angle in degrees) of the Ends and Bends Only option was not used correctly.

Fixed unique filename generator to sequentially increment filename numbering. In some cases it was not working correctly.

Fixed an issue with the multithreaded version of the 4D file Calculate Error operation. It was possible to generate NaNs in empty bins of a plane when the maximum number of processors was selected to be greater than 1 and more than one plane exists in the 4D file.

OMNI 3D's desktop and file icon have been updated.