tNavigator, developed by Rock Flow Dynamics, is a high-performance tool for integrated static and dynamic modelling from reservoir to surface networks. tNavigator has been in development for 15 years, releasing 4 software updates per year. Our team includes 50 support engineers and geologists in 32 offices across 28 countries and over 100 software engineers supporting our development. The tNavigator community has 290+ commercial clients in 42 countries and 80+ universities in 28 countries.

Takes full account of uncertainty throughout your system, for better optimisation of production and improved history matching.

Adapts to your environment. It is a multiplatform application written in C++/ CUDA. It runs on laptops, workstations and HPC clusters, with or without GPUs. A cloud-based solution with full graphical user interface capabilities and cloud-side post-processing via remote desktop is also available.

tNavigator offers a wide range of tools to allow geoscientists to fulfil their static modelling workflows including: seismic interpretation, well correlation, a structural modelling application, facies and petrophysical modelling and volumetric calculations. tNavigator has Python based workflows, allowing the user to complete routine operations in an automated and timely manor. The tools open up a newly collaborative environment for Geoscientists to understand current fields and prospects and make concise geological decisions. 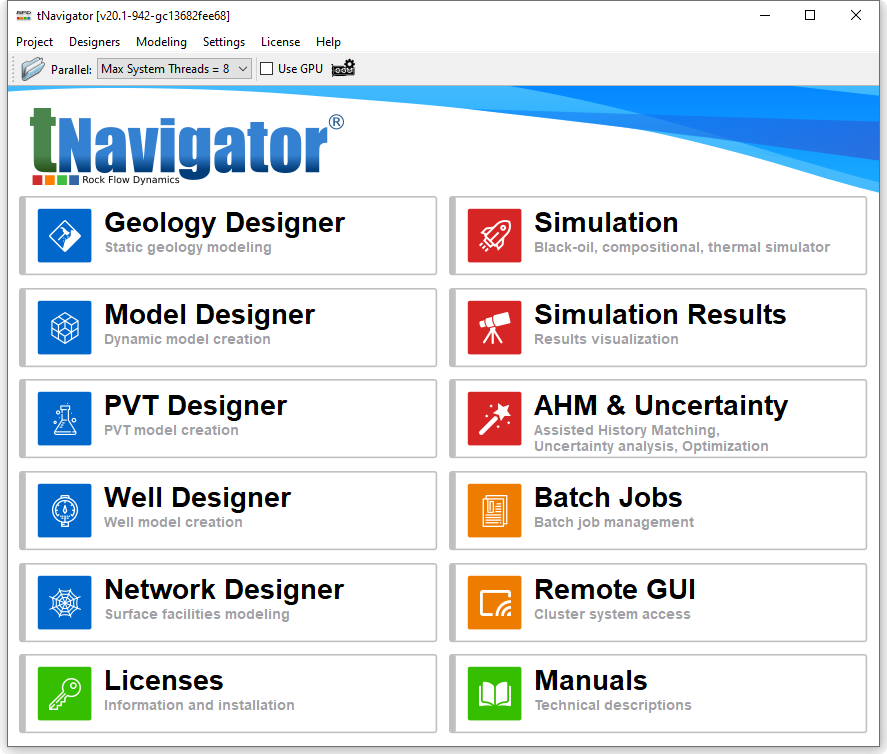 Rock Flow Dynamics has released a new software version, which implements many improvements and additions. tNavigator 20.1 is available now for users.

The key new features in tNavigator 20.1 are:

• Default settings of simulator have been changed:

– The following default parameters are modified:

* Default value of TOLVARWELL is equal to 1 (100% of well rates variation per step).

* DTPRED option is switched on for thermal models.

• In workflow of Assisted History Matching and Uncertainty module the following options are available: loops for variants in the group may be created; one experiment may be started from the results of another; string variables in the objects names may be used.

• In Assisted History Matching and Uncertainty module any calculated parameters (rates, watercut, etc) may be visualized on 2D using MDS and PCA. Variants may be clusterized by any parameters taking into account selected time interval.

• In Geology Designer and Model Designer the tree of Geometrical objects is updated:

Object filter is available to show/hide objects by type.

• In Geology Designer object-based simulation has been implemented.

• In PVT Designer Herning and Zipperer (HZYT) correlation is supported for viscosity calculation.

• Geology and Model Designer may be used in view results mode using the license of Graphical Interface.

In this mode it is possible to view data, saving changes is not available.