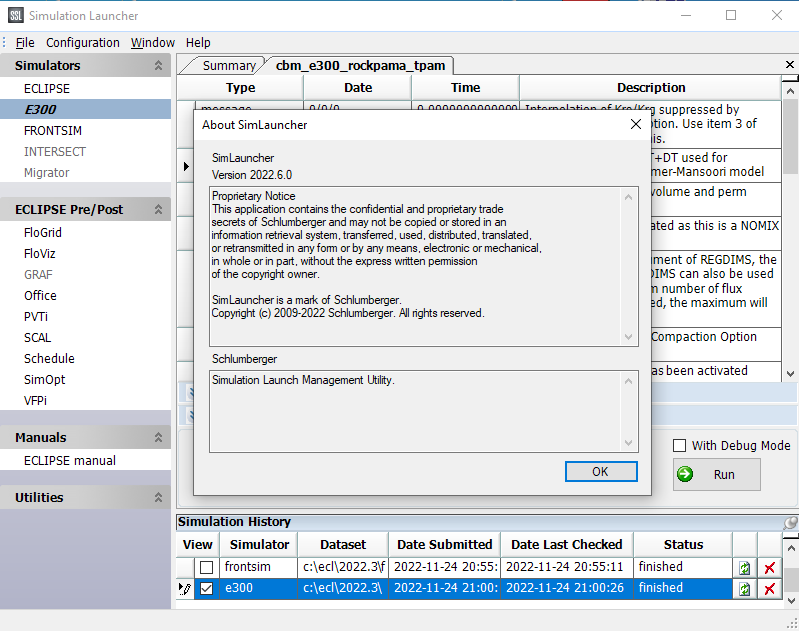 The ECLIPSE 2022.3 industry-reference simulator offers the industry’s most complete and robust set of numerical solutions for fast and accurate prediction of dynamic behavior for all types of reservoirs and development schemes. The ECLIPSE simulator has been the benchmark for commercial reservoir simulation for more than 25 years thanks to its extensive capabilities, robustness, speed, parallel scalability, and unmatched platform coverage. With over 30 years of continuous development and innovation, the ECLIPSE simulator is the most feature-rich and comprehensive reservoir simulator on the market—covering the entire spectrum of reservoir models, including black oil, compositional, thermal finite-volume, and streamline simulation. By choosing from a wide range of add-on options—such as local grid refinements, coalbed methane, gas field operations, advanced wells, reservoir coupling, and surface networks—simulator capabilities can be tailored to meet your needs, enhancing your reservoir modeling capabilities.  This release of the ECLIPSE suite 2022.3 includes developments enhancing the performance, usability and functionality capabilities of the simulators.

For both ECLIPSE 100 and ECLIPSE 300, the pressure drop equation for autonomous inflow control devices has been enhanced to allow an exponent to be used for the density function.

Cumulative totals for field, groups and wells are now available for the gas lift option in both ECLIPSE 100 and ECLIPSE 300. The new summary vectors are FGLIT, GGLIT, WGLIT and LWGLIT. For restart cases, these values will be cumulative with the totals from the base case run provided that the base case was run with 2022.3 or later.

• Input file processing error reporting has been improved for cases where the problematic input line is very long and/or contains tab characters.

• The ECLIPSE Technical Description referencing convention has been improved and updated, and is now consistent with the convention used in INTERSECT ECLIPSE 100

• Several internal algorithms have been improved to reduce memory and other system requirements.

• Checks on the requested maximum number of summary data items have been improved to avoid cases where there was no warning that the value was too small.

• PRT file reporting for the coal bed methane option has been improved to correct some issues seen in parallel runs.

• License checking has been improved in parallel to ensure that missing licenses during simulation always generate appropriate messages.

• Field and fluid-in-place region separators can now be assigned as well separators.

• The workflow for thermal decks with LGRs has been improved to ensure that output suitable for visualisation is always generated.

• The behavior when specifying the guide rate in the GRUPTARG keyword now matches the equivalent input when the GCONPROD keyword is used.

• The output of LGR heater summary vectors has been corrected.

• A debug facility has been added for convergence failure in the black oil single phase flash.

• A facility has been added to calculate CO2 enthalpy from internal tables generated with the Symmetry process software platform for thermal models without additional hydrocarbons. This removes the need to specify the SPECH and HEATVAP families of keywords. It also provides optional enthalpy phase mole fraction dependency and a much more sensitive enthalpy pressure dependency than the existing ZFACT1 keyword. Enhanced debug output of enthalpy variation with pressure and temperature is now available for all enthalpy methods, with additional mole fraction dependent tables where relevant.

• Summary output has been corrected for a large number of water (and oil) summary vectors for the GASWAT and non thermal CO2STORE options.

• The defaulting behavior has been improved for the OILVISCC and OILVINDX keywords.

• The diffusivity behavior for water components in GASSOL models has been improved. Solid mole fraction reporting

The solid mole fraction reporting facility has been improved and extended to support non CO2STORE models.

• When the component is defaulted, by default reports are only generated for components with a possible solid phase.

• 3D reporting can be requested for non CO2STORE models, with the SMF mnemonic in the RPTRST, RPTSOL and RPTSCHED keywords.

• The maximum length of a .GSG filename has been increased from 72 characters and is now limited only by the maximum number of characters per line of an input file.

• ACTIONX condition checking has been improved to avoid invalid indexes being interpreted as 1.

• Validation has been improved for summary keywords starting with B and LB.

• PRT reporting for amalgamated grid connections has been corrected for parallel runs.

• LB summary vectors can now be used in ACTIONX conditions.

• Error handling has been improved for restart cases where the units are different from the base case.

• Reporting of negative directional multipliers has been improved and made consistent with ECLIPSE 100.

• LB and LW summary vectors can now be used in ACTIONX conditions.

• SPECHx keyword checking has been improved to cover all components.

• Memory requirements for the velocity dependent relative permeability model have been reduced.

• Error handling has been improved for parallel runs when invalid partitions are specified.

A new version of Intel MPI (v2021.4) is now included. This version is recommended for use with modern hardware configurations.

The previous version (v2018.1) is also included. This version is retained for use with legacy hardware configurations.

Note: The new version is not a direct replacement for the old version because the underlying fabric has changed. The environment variables for configuring the new version are different and you must revisit these if you decide to upgrade.

• For thermal models without additional hydrocarbon components, the minimum temperature for K-value correlation has been reduced from 12°C to 1°C, and a facility has been added to report grid blocks where hydrate formation conditions exist for the whole grid or individual blocks. PRT file reporting has also been extended to cover these lower temperatures, and an option has been provided to output extensive Kw tables to the debug file.

• The FULLIMP solution method is now compatible with models containing solids where water is not an explicitly defined component.

• The message and warning system has been improved, with improved wording, additional information provided, and large numbers of identical messages reduced.

• Reporting for water-based quantities has been improved for isothermal CO2STORE and GASWAT models, for summary keywords and in the PRT and RFT files.

• An issue which could cause parallel runs to hang if an impossible set of partitions was requested has been fixed, and reporting has been improved to include all invalid partitions.

• It is now possible to default the local grid name when requesting LC summary keyword output, and the error checking for invalid well names has been improved.

• The P/Z summary keywords can now be used in models with depth-dependent initial temperature.

• An issue which could cause group rates and totals to fail to be updated for complex control structures has been fixed.

• Checking and reporting for invalid temperatures when the KVCR or KVCRWAT keywords are specified has been improved.

• The documentation for use of summary keywords with a component index in UDQs has been improved.

• Table value checking reporting has been improved to include the limit which has been violated.

• An issue which could cause a valid set of user-supplied parallel partitions to be rejected has been fixed.