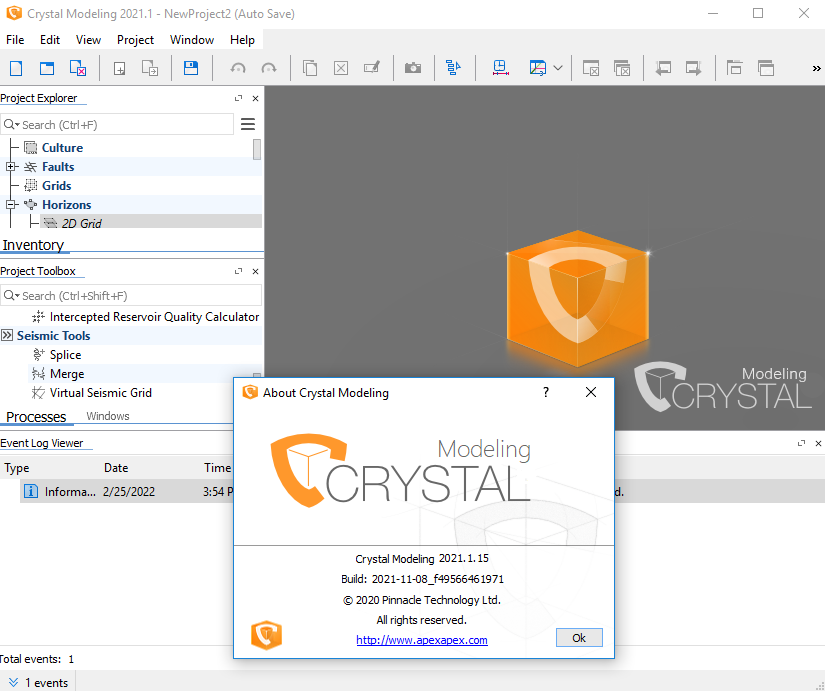 CRYSTAL can establish 3D geological frame model and geological grid model based on single-value or multi-value horizon data and fault data. It is especially suitable for structural modeling of complex building blocks. CRYSTAL provides a concise, fast and robust interactive structural modeling method, even in complex structural areas, users can it can quickly create and edit horizons and faults in two ways, automatically or interactively, and accurately handle the intersection between horizons and faults system, set the stratigraphic deposition contact type.

Mesh coarsening is possible, and its 3D mesh can be exported to Eclipse and CMG for numerical simulation, or to Petrel Wait for the software to perform other processing.

In order to improve the rationality and accuracy of the comparison of synthetic records, a time-frequency analysis tool is provided to assist the well-seismic calibration.

For deviated well calibration, CRYSTAL uses patented technology to carry out deviated well synthetic recording and wavelet extraction: walking along the deviated well trajectory the dip angle is superimposed on the corridor to form a seismic trace next to the well, and then the seismic wavelets are obtained to ensure the accuracy and reliability of the subsequent seismic inversion.

SpecMAN is a patented seismic spectral decomposition, AVO and seismic attribute analysis package. Its characteristics are as follows:

Provides 7 kinds of spectral attribute calculation and a variety of attribute analysis tools.

CRYSTAL's patented technology. Deterministic inversion takes into account the influence of noise on the inversion process, and is an inversion algorithm based on earthquakes.

ThinMAN is a high-resolution spectral inversion algorithm that reservoir researchers can use for "time-space adaptation" The spectral inversion, combined with the space-variable wavelet, uses the optimization algorithm to obtain high-resolution reflection coefficient volume and relative impedance imaging. ThinMAN can solve thin layer prediction problems smaller than the tuning thickness, and its focus is to obtain local Spectrum information. The output is a series of reflection coefficients, etc., and the apparent resolution is much higher than the input seismic data, which can be used to refine thin reservoirs.

3) Seismic data volume is obtained by convolution of seismic wavelet with high cutoff frequency, which is used for seismic attribute analysis and inversion.

Comprehensive analysis of multiple seismic attributes related to logging information to determine the best multiple seismic attributes related to reservoir physical properties. On this basis, the neural network technology is used to train under the control of the prior samples beside the well, and the continuous model of the attribute inversion is obtained. Type, and then carry out data volume inversion work.

CRYSTAL uses the above methods to invert various reservoir lithology and physical parameters such as porosity and shale content. Impedance cannot The environment of the reservoir and surrounding rock is well differentiated, and the multi-attribute approach can provide information beyond impedance. Multi-attribute inversion is nonlinear High-resolution inversion, especially for fluvial facies reservoirs (fast facies transition) and low signal-to-noise ratio areas.

Stochastic inversion is an effective high-resolution reservoir prediction tool when drilling data is abundant in the work area. Based on known reservoir data as Based on the theory of random functions, multiple optional, equal-probability reservoir models are generated, through synthetic records and actual seismic Compare the channels to determine the reasonable impedance. CRYSTAL determines the variation ellipsoid of spatial variables in the horizontal and vertical directions through seismic attributes, logging information, etc. Describe the spatial variation of reservoir lithology and physical properties.

The stochastic inversion method can make full use of abundant logging information in the middle and late stages of exploration and development. The angle reflects the uncertainty of reservoir lithology and physical properties.

Under the premise of the calculation law, the uncertainty of the reservoir itself is described to the maximum extent, which is of great help for the identification of thin interbeds. Various moduli obtained by pre-stack inversion, such as the ratio of P-to-shear wave velocity, can well assist in the identification of lithology and fluids.

It can realize functions such as deterministic modeling, stochastic modeling and phase-controlled modeling. The generated various reservoir geological models can be directly input To VIP, Eclipse and other reservoir numerical simulation software.

Reservoir engineers predict the location of microseismic occurrences on this platform, and determine the relative value of microseismic to horizons, faults, and well trajectories.

and the positional relationship of the fracture model defined on the geological grid. Hydraulic fracturing data (pressure data and other time-varying data) can be