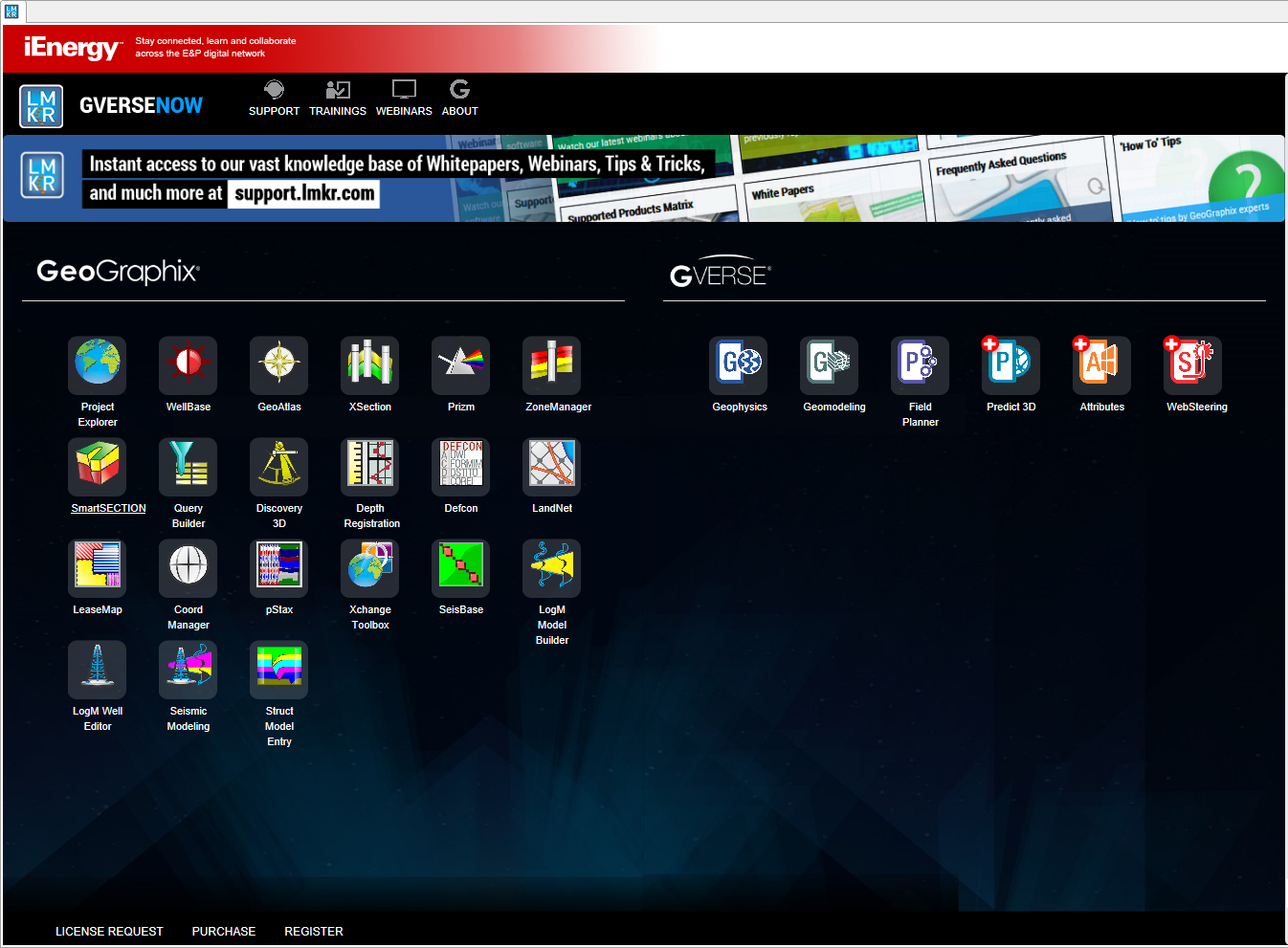 The GVERSE Geomodeling is an integrated environment for modeling that incorporates existing mapping and cross section features of smartSECTION with a newly built 3D View. It takes your smartSECTION interpretations to a whole new level with 3D modeling, while also enabling you to fully utilize the existing smartSECTION features.

The foremost objective is to provide an integrated real-time 3D visualization of a developing geomodel. You can integrate petrophysical, geophysical, drilling, and GIS data into your interpretation to create the most comprehensive geomodel possible.

The DefCon2 program has been designed to allow users to define the format of ASCII data files to be imported into the WellBase database, the LandNet survey database, and/or to LandNet layers.  The resulting import definition contains the information necessary to parse the data from the ASCII file and store it in the selected WellBase or LandNet database or LandNet layer. The information in these Help files should allow you to build import definitions for most simple data formats.

DepthRegistration provides raster image display capabilities for XSection smartSECTION and PRIZM. Raster images of logs, core, diagrams or any image applicable to a well bore can be imported or opened in DepthRegistration.

Discovery™ 3D is the GeoGraphix® Discovery™ module that shows well, geological, and geophysical data in a three-dimensional view.

Note:  Discovery 3D requires a Windows 7 operating system, a 64-bit platform, and a video card compatible with DirectX 10 or higher. 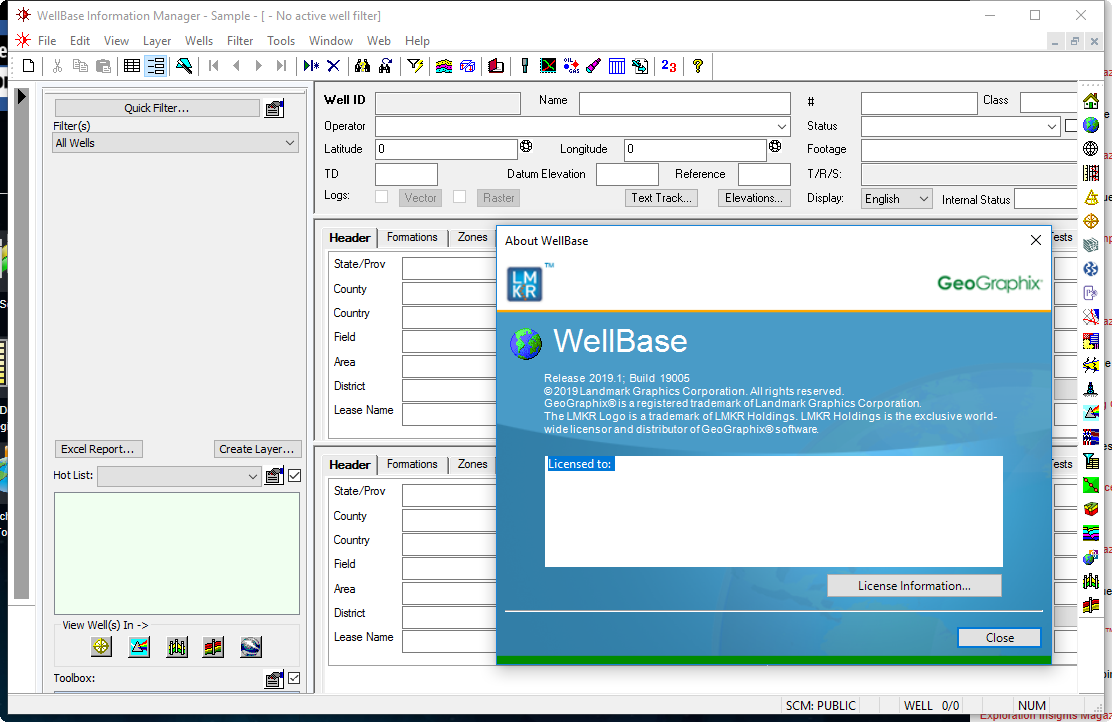 The Well Editor is a multi-purpose geophysical application that is used to interactively edit well logs and evaluate synthetic trace character response when tieing seismic data to well locations.

The other options include a math toolkit, full wavelet editing, check shot support and complete wavelet extraction. Deviated wells can also be displayed with their associated synthetic traces, which are automatically updated whenever the well curves are edited.

The Model Builder is a primary LogM application that starts where the Well Editor leaves off.  The Model Builder is used to assemble geological cross sections from well logs from which interpolated synthetic trace models are generated. These trace models are typically used as an empirical modeling tool for evaluating the character of anomalous seismic responses between wells.

AVO/AVA models can also be generated, stratigraphic relationships defined for each layer and new or existing correlations drawn and easily edited with lithology patterns displayed between correlations. In addition, horizon trace attributes can be displayed and plotted with each generated trace model.

The GeoGraphix® Engineer's Dashboard combines the data analysis capabilities of Microsoft® Excel® with the display and presentation features of the GeoGraphix Discovery™ suite. Generate an Excel PivotTable™ from WellBase® and use analysis tools in Excel to quickly summarize data, create calculated fields and apply formulae to the data. Filter and organize information in Excel, then use the GeoGraphix Engineer's Dashboard Add In to display data associated with the selected information on a GeoAtlas™ Map, in WellBase™, in Google Earth™ and ZoneManager™.

Effective field planning is essential for making the right exploration and production decisions. The process involves determining the optimum location and orientation for wells and well pads. The Field Planner dialog box allows you to create plans, add (or create) well pads, determine the number of wells on each well pad, and determine their location and orientation. The wells are based on user-defined constraints (such as spacing between wells, height of toe above heel, kickoff depth, etc.) which can be edited to suit your preferences.

You can instantaneously create a layer in GeoAtlas to display your field, well pads, and wells. Field Planner saves planning time and helps reduce costs to a large extent. 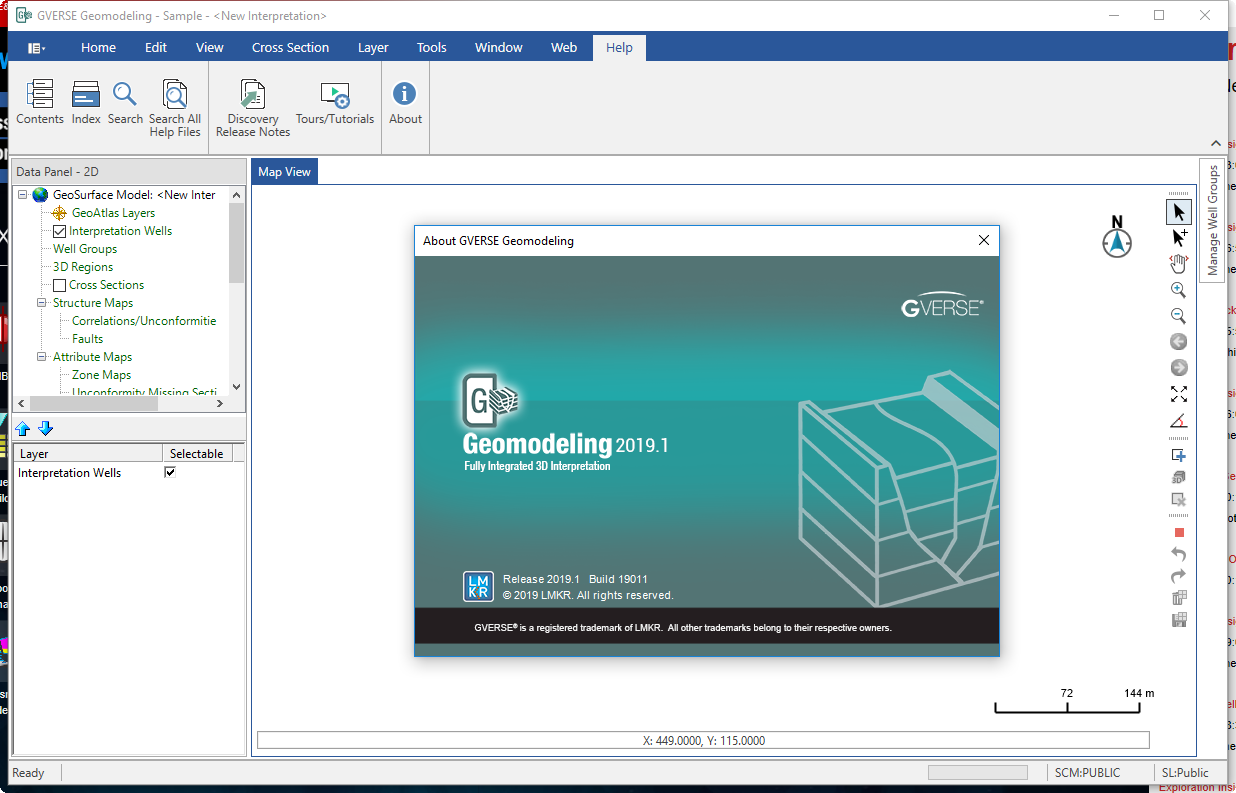 The FK-Migration option used in Struct applies Stolt’s method of Frequency Domain migration to a 2D seismic dataset. The input dataset is typically a diffraction seismic model, generated by Struct.

Fluid Substitution is a technique often used when more accurate modeling of synthetic traces and well cross-sections containing hydrocarbon bearing rocks is required. An example is where the output curves are used with AVO analysis to observe the effect on seismic response with different fluid / gas mixtures.

GeoAtlas™ is the mapping environment for Discovery™ Geology.  Use GeoAtlas to display, modify, and arrange layers created in other GeoGraphix® Discovery™ or Discovery™ on OpenWorks® applications to create maps and montages. In GeoAtlas, you can:

-          Use a contouring shortcut to quickly create contour layers from posted Z-values such as formation top depths or porosity values.

-          Use the scale-dependent resolution feature to determine at what scale a layer, entity type, or text feature appears on the map.

-          Construct montages displaying maps and cross sections, as well as inserted text and graphics files defined in other applications

IsoMap is the comprehensive surface modeling and contouring application for GeoGraphix Discovery. You can create a wide variety of contour maps, grids, and color renderings including faults for display in GeoAtlas and XSection.  IsoMap layers are typically created in GeoAtlas; in addition, PRIZM (the log interpretation component of Discovery) and GVERSE Geophysics (the 2D-3D seismic interpretation Discovery module) have the capability of producing IsoMap layers for display and further manipulation in GeoAtlas.

LandNet is the Discovery Geology application for importing landgrid and cultural data and creating layers based on these data. LandNet accepts data from a variety of commercial and government sources. The application is designed to manage cartographic data including survey data (e.g., Jeffersonian, Texas, Canadian, etc.), political boundaries, transportation, hydrography, and many other map features which provide a visual representation of the location and layout of an area of interest. 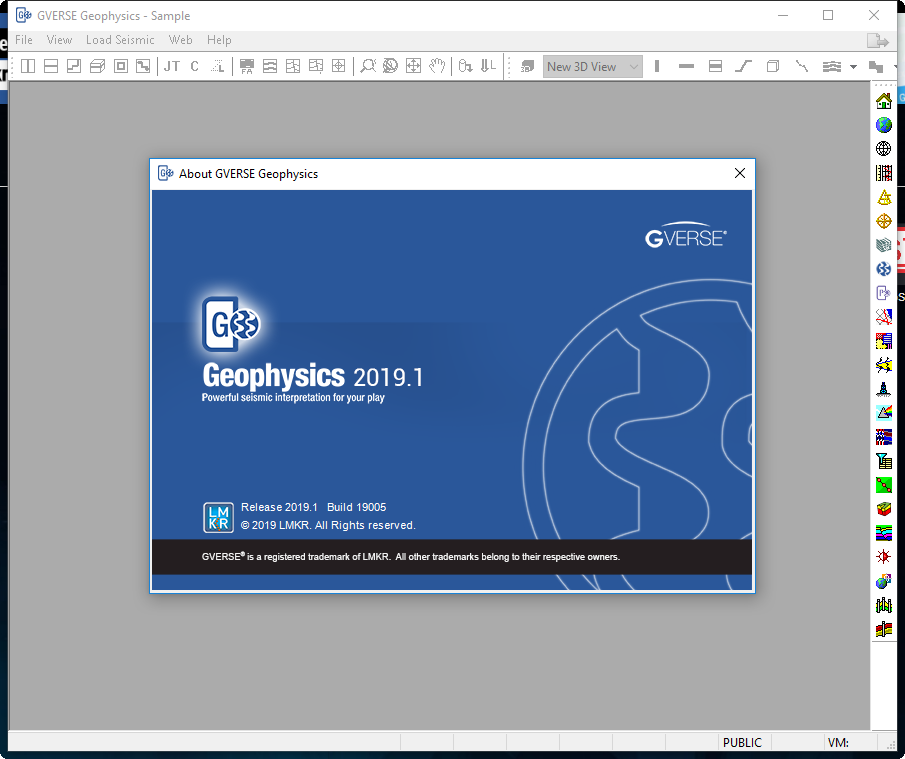 LeaseMap® is the Discovery™ mineral interest and leasehold mapping system that enables analysis of land ownership for a geographic region. Using LeaseMap, you can map land ownership positions for your company, partners, and/or competitors. For example, you can quickly determine the mineral interests of a particular company, the working interest of a company on an isolated piece of land, or leases that expire in the near future.

Lease Planner is used to define your drillable acreage using Shapefiles or Arc GIS feature services. Using Shapefiles, areas can be defined where pads and wells are located. Setback can be applied around these areas to define surface constraints, along with the application of the intercept buffers around the pre-existing wells in your area.

The LogM Digitizing program is used to convert paper copies of well logs into an electronic format that can then be used by other LogM programs such as the Well Editor and Model Builder.

PRIZM™ is the GeoGraphix® Discovery™ petrophysical application designed to assist geoscientists and petrophysicists in analyzing and interpreting well log data. PRIZM supports the import of digital data from numerous sources and provides you with integrated data views and analysis. Using PRIZM you can view, edit, and analyze well log data in three different formats.

The Production Analysis functionality in Discovery allows you to analyze production data stored in the WellBase Information Manger and estimate remaining reserves and well life based on the past production history.  The functionality is designed to provide the capabilities of the current ResEV application.

ProjectExplorer is the Discovery™ application for creating, activating, organizing, and modifying Discovery projects. ProjectExplorer has an interface similar to Microsoft® Windows Explorer.

The Data Processing module is designed to allow simple processing methods to be applied to post-stack seismic data. The selected process methods are displayed in a flowchart style and executed in chronological order.

The output files are stored in a user specified directory. In addition, intermediate output can also be defined after any process step.

The Plot Log / Synthetics program is used to preview well logs and synthetic traces generated by the Well Editor, Turbo Synthetics or AVO Synthetics prior to plotting.

The Reformat Wells program is a convenient central location used to import well log data from a variety of industry formats into LogM including LAS, QC/IDC and LOGarc. Well log files and cross sections in the original legacy DOS LogM format can also be imported.

SeisBase is the seismic data management tool of the Discovery Geology software. SeisBase allows you to import seismic survey location data, along with selected attributes associated with interpreted seismic horizons. Further, SeisBase has the capability of creating display layers of the seismic surveys and attributes in GeoAtlas.  These layers can also be used to generate gridded contour and color density maps using IsoMap.

SeisXchange™ is available only if Landmark Connect (the ability to access OpenWorks® and SeisWorks®) is installed on your system. SeisXchange and SeisWorks enables users to transfer seismic data files plus 2D and 3D Horizons and Faults between GVERSE® Geophysics and SeisWorks without tedious export-import operations.  The SeisXchange application is launched from the Xchange Toolbox in any discovery application. 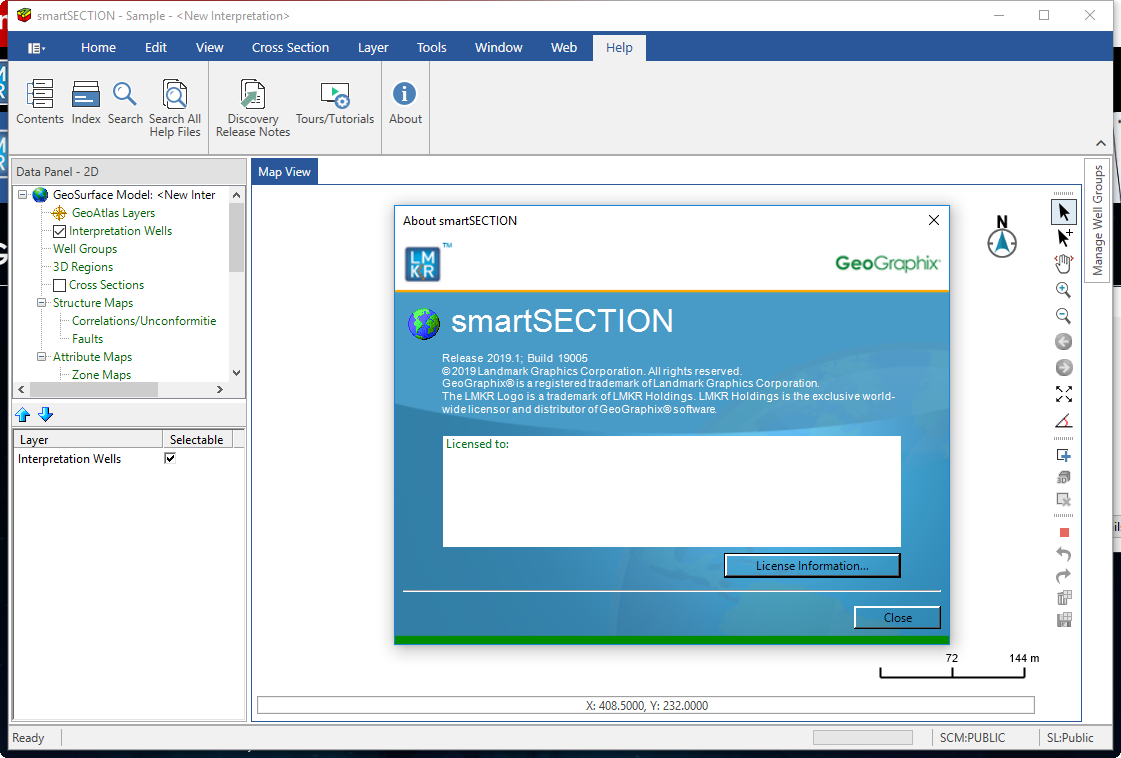 Struct is a comprehensive forward seismic structural modelling tool that is used to determine the seismic response of complex geologic structures in areas where there is little or no well control.

Struct is made up of two programs. The Model Entry program for creating structural models and the Model Viewer program for viewing and plotting trace models.

Integration refers to the process of transferring well or model data between LogM and Discovery applications.

Every time Well or Model data is transferred between LogM and Discovery, the request is handled by the translator program.

Turbo Synthetics is the fastest and easiest way to generate professional looking synthetic trace plots from well log data. This enhanced version of Turbo Synthetics offers many new features that improves the established functionality geophysicists have come to rely on.

Wavelet Extraction is a separate program which opens after the extract wavelet process is first started in the Well Editor.

In the Well Editor, the initial step was selecting the Tools->Extract Wavelet option and displaying and aligning the input datasets.

Once the extraction method was chosen, the Wavelet Extraction program opens with the extracted wavelets displayed.

The ZoneManager™ application provides for storage, display, and analysis of well data on a zone basis. Using ZoneManager, you can define multiple zones, define a large number of associated attributes for each zone, and input attribute data for each well in the project. Attributes can be of numeric, date, or text data type.